I almost wrote about this on Tap, but, it’s pretty random, so I decided to just post it here. It’s going to dovetail now into a second part about Game Journalist Ethics, because it seems like writing about that right now has become a mandatory part of the conversation. Fortunately, individual contributors have already weighed in on their side, so I feel I can make my own response a little more personal. 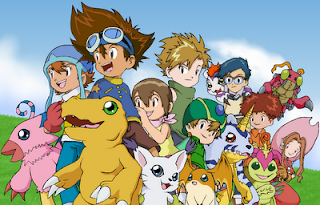 Because I have written about Red Vs Blue, I am now on a distribution list for some additional DVDs. I was surprised earlier this month to receive, unsolicited, an envelope containing an unusual artifact. That artifact was the entire first season of Digimon, in the form of a DVD box set.  Digimon is not a show that I had ever watched regularly, other than catching it on accident while channel surfing. I am just a little bit too old, and Pokémon and other shows related to the monster-collection craze largely passed me by. However, it did occur to me that, at the time, the DVD box set of Digimon was yet-to-be-released, that I had early access, and that someone, somewhere, would highly value and covet this particular item. In honor of that person, whomever he or she may be, I have been watching Digimon.

It’s grown on me a little.

It’s obviously a kid’s anime. The dub is not perfect, but respectful enough, with lots of on-screen Japanese text left untranslated. The story is standard, as these things go. A group of children hanging out at summer camp are suddenly whisked away through a magic portal to an alternate dimension of fun and adventure. I like these kids because they behave pretty logically in this situation for the most part. They enjoy adventure, but complain, as you would, about a lack of access to finger foods and hot showers. If they don’t entirely behave like real human beings, they at least behave a lot like real player-characters in a tabletop RPG.

The GM is running for a table of seven: a big table in my opinion. In addition, each kid character has a spirit animal in the form of a “digimon.” Entirely too many things are named Digi-something or something-mon. This gets a little hard to track. I especially question the wisdom of introducing all fourteen characters in the first episode, then, immediately changing the names of seven of them.

More characters are of course added later, but not this rapidfire. One nice thing about the Digimon, when compared to Pokemon, is that they can hold entire conversations. They do have less personality than their kid counterparts, though. 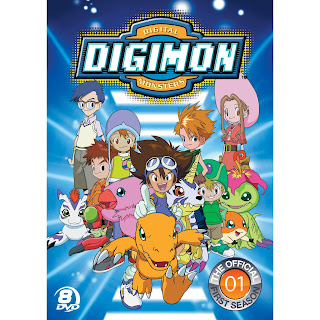 Digimon has a truly terrible theme song. The same words are repeated over and over, it has no tune to it, and it runs overlong. On the DVD, the skip button does not skip the theme song in each episode, but the entire first act. So one must either carefully fast forward through this, or endure it endlessly. That’s the worst thing about the DVD box set. I don’t think kids will mind. This is a very grown-up complaint.

As a grown-up, I like the alternate universe described by Digimon. It’s both more surreal and more coherent than the world of Pokémon. The adventure universe, called the “digital world,” is a smashed-together combination of unspoiled wilderness and post-apocalyptic architecture. The fourth episode, for example, sees our heroes walking through a desert filled with the remains of still-standing electrical power lines that don’t connect to each other. The surrealism is highlighted with a painterly background style with a heavy focus on pastel colors. Splatters of white paint flecked onto almost every background plate show a world filtered through motes of dream-dust.

I’m also somewhat fond of the creature designs on this show. The titular Digimon begin life as tiny jelly balls hatched from painted Easter eggs. As they grow, they can (yeah) “digivolve” into more powerful versions of themselves. Each time they do this, they become slightly less cute and slightly more monstrous. The adorable children are genuinely thrilled to see the transformation of, for example, Birdramon, a giant Roc-like nightmare creature whose birdbeak carries rows of jagged sharp teeth. One episode’s villain takes the form of a ten-foot red-eyed Teddy Bear that shoots lasers from its eyes. Another is a slender gremlin whose skin burns with fire and whose mouth is stitched shut. I wish they had better names, but the creepy-cute synthesis is inspired.

None of this might be news to you. I am aware that while I am clueless and silly, an entire generation of kids grew up watching this and similar shows. For them all I have to offer is this punchline: hey, big kids, there’s a Digimon box set out now, available from Amazon or your local retailer! I will probably be bequeathing my copy to a younger generation in due time.

3 thoughts on “I Watched A Bunch of Digimon”