To follow: some thoughts on the game called Infamous, which is stylized inFAMOUS or sometimes inFamous, and was released for Playstation 3 consoles in the year 2009.

This is another one of those games that I missed when it was new due to lack of the proper hardware. I don’t think I will write a full review for it like I did Uncharted, though it’s still possible. I’ll figure that out for sure when I’m in further. Right now I’m about a quarter done with inFAMOUS, as far as I can tell. Therefore there won’t be much here in the way of spoilers, though probably a few mechanical ones. 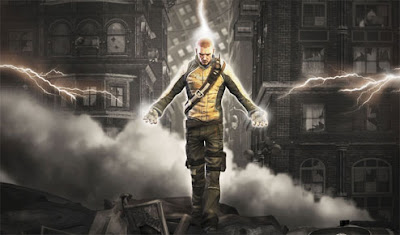 I know, that’s terrible game writing, isn’t it. I have to elaborate or risk losing my imaginary license. InFamous is the opposite of Uncharted in one key area: despite being a high-fidelity game, it has controls that favor responsiveness over beauty. Cole, the electrified protagonist, looks downright strange in motion. He climbs up buildings in hopping motions so awkward and hyper-quick that it almost comes back around to elegance. He grabs onto any ledge that comes close to his hand. He curls a foot over the edge of an rooftop in an almost animal way, so that he can get a hand free. He sticks magnetically to high wires and platforms. He is basically an electric Spider-Man.

But this means that when I press the jump button, Cole jumps. He does not wait for a time when that would look appropriate. He just jumps, even if that means cancelling out a previous animation. That’s important.

inFamous does have one of the same problems as Uncharted in that thousands of faceless dudes (literally; since they wear hoods) want to kill Cole for no discernible reason. (One might think it’s because he kills all the other guys that dress like them, but generally, they start it.) I think open-world games are sometimes scared to let the player just explore without having someone shoot at them. As if I’m going to get bored with the joy of just leaping around! Fortunately, electrocuting bad guys with lightning out of the hands (or feet) can be satisfying despite their stubbornness and ubiquity.

InFAMOUS does not have a very good minimap. I got used to it after a few hours. But clicking the thumbstick trying to get a bead on random items that blip and flash in and out of existence on a small corner of my screen makes me squint a lot. The map usage is also not very well-explained. It’s possible inFAMOUS assumes I have a larger television than I have. 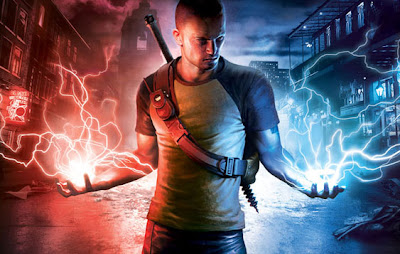 A big selling point of InFaMous appears to be its karma system. So it’s a shame that it feels so tacked-on and pointless. I know it wasn’t supposed to be. But since I decided at the beginning of the game that I was interested in being evil, there’s never any point to taking a good action. Powers are tiered by Cole’s karma, good or evil. Therefore, when I’m given a moral choice, I choose “red” without thinking, every time. Even if a good action could somehow benefit me otherwise, it closes off powers I get for moving out into the red side of the karma meter. At first I would occasionally succumb to the temptation to use my healing power on passers-by, just for the free experience points. But then I realized that it tilts my karma into the blue, or good side. So I have no choice but to suck out their souls instead.

I’m not saying “the game forces me to do bad things.” I chose to do bad things. But that was a choice I made exactly once, and right at the beginning, mostly arbitrarily. Once that choice was made once, no other rational moral choices exist for the rest of the game.

So that’s a real complaint, but they got the “superhero” (/villain) feel pretty right. A big part of this is my ability to awe and dazzle people. The randomly generated crowd on the street has a nice variety of barks whenever Cole runs by. They’re typically quick, and not repeated often enough to get annoying in that “arrow to the knee” kind of way. It feels pretty natural, at least most of the time. “Look, it’s the Electric Man!” someone cheers, as I leap from the top of a billboard to the sidewalk down below. “…What’s he doing?” a man asks.

Yet no matter what I do, no matter how red the karma, it seems like people still love me. I stop by a downed person’s body, lean over, and in a red arc of evil electricity, devour her remaining life force.

“Maybe he’ll do it again!” an excited pedestrian exclaims.