I’m sending a quick dispatch from a crowded hall in GDC to talk about the upcoming developments in the Unity engine. I don’t always write about specific tech previews like this, but I felt it would be interesting for the developers in the audience!

In the spring, Unity plans to ship Unity 4.5, with some new 2D physics options and performance improvements, followed by 4.6 which will contain an updated Unity GUI. The major developments are coming with Unity 5, the major updated release.

Unity 5 will have a 64bit editor, which was a crowdpleaser for developers whose games were running out of memory. There will be a physx upgrade, navmesh improvements, and better scripting performance. Unity 5 is integrating Speedtree. It will also have an all new audio system with a new importer and mixer. There is a new pipeline in the works for asset bundling, making using asset bundles easier for developers.

Unity Cloud, which is available for Unity 4 devs now with a plug-in, and will be standard with 5, contains an integrated ads API for developer cross-promotion. The beta for Cloud is at http://cloud.unity3d.com. 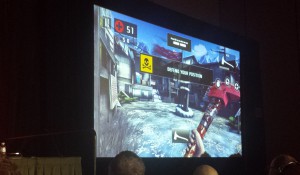 Web deployment improvements are in the works. Partnering with Mozilla, Unity is adding a web GL exporter, which is shipping as a preview mode. In the Web GL preview, a fully 3D game targeted for mobile ran smoothly on the web. The Unity engine was all converted to JavaScript in this mode to run directly in the browser.

New graphics features include lighting and shader improvements. The new Ubershader is the standard shader for Unity 5. It uses a “shader generator” to create a variety of optimized shaders and eliminates the need to write specialized shaders for different material types.

Unity 5 will have real-time GI and lighting improvements. Enlighten pre-computes occlusion and term, and makes it possible to have total dynamic lighting on a mobile device. Unity showcased a demo of a futuristic space-base, using emissive surfaces only to provide all the interior lighting, reacting believably with reflective surfaces.

There are some big improvements coming to Mecanim, the integrated animation engine. The new state machine setups allow for scripting state behaviors so, for example, an idle animation can be randomized. A blend tree allows for facial animations, or can be another way to mix animations.

Unity hasn’t revealed a specific release date for these updates, but they are planned for later this year with the 4.5 updates happening in spring. Hope this information is interesting news for Unity devs! The official page with visuals and examples is at http://unity3d.com/5 .

One thought on “Upcoming Updates to the Unity Engine”